David Karp Backs Down; That Shrieking Donkey Bray You Just Heard Was Jackles's Howls of Despair 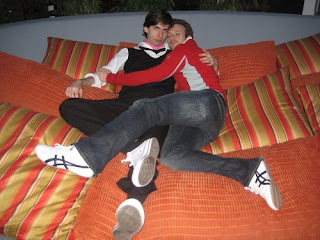 I’ve read several hundred responses from users who are upset about the recent changes to our Content Policy.

To clarify, this policy specifically targeted “reblogging-blogs”, where the sole purpose is to repeatedly reblog posts from a specific user or group. We view this as an abuse of our reblog feature, which places accountably on the identity of the poster.

While there are still relatively few blogs of this genre on Tumblr, they’ve become an increasing detriment to our service as they’ve started to proliferate.

Our moderators make no determinations about your posts, except for spam and illegal content, and we have zero interest in censoring your voice. But we now realize this is the first time our Content Policy forbids content that is potentially meaningful.

After giving this serious consideration, we think it would be more appropriate for us to give you the control to police this content, rather than our moderators. So we’ve hurried to finish a new block feature that will let you filter content from your post notes and Dashboard.

In light of all this, we’ve decided to restore the accounts affected, and remove the language in question from our Content Policy. It was a miscommunication that lead to these accounts being removed prematurely, but it was my decision to leave them off. In retrospect, this was the wrong decision, and I hope we can work to regain your trust and continue building Tumblr into something great.

Some points on this mea culpa:

1. Whoever the clever commenter was who noted the power of a negative New York Times piece -- you're bang on.

2. I do wish young David would learn that the word he's looking for is ACCOUNTABILITY.

3. Once again, whatever Jackles touches turns to shit. She just HAD to send an e-mail to Gawker crowing triumphantly and using big words and concepts that she doesn't understand. What did that achieve? It made Karp look like her whipped little lapdog. Even a 23-year-old who likes to post photos of himself dry-humping Charles Forman possesses some male pride, Jules. What a dumb bunny you are.

p.s. Charles Forman is hot. I wonder if his hearing has returned after the tinnitus he suffered while dating Jackles?

UPDATE: Valleywag has a post. The comments are always fun.
Posted by Jesus at 7:43 PM